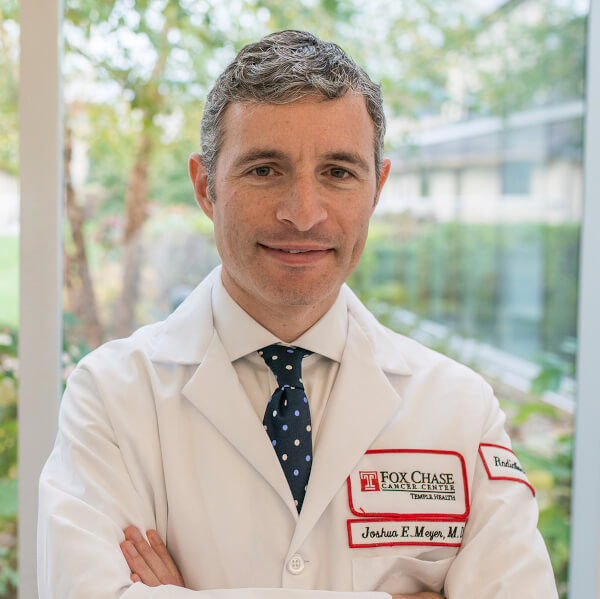 “With pulsed low-dose-rate radiation, the same dose of radiation is given similar to any other therapy, but it is delivered in short pulses over a longer period of time,” said Joshua E. Meyer, MD, Associate Professor in the Department of Radiation Oncology.

Until this point, pulsed low-dose-rate radiation has only been used for patients requiring retreatment with radiation to the same location. Meyer was the senior author on a paper published recently in the American Journal of Clinical Oncology that retrospectively analyzed the off-study use of PLDR irradiation to the pelvic region in patients with prior radiation to that area. After one year, 59 percent of patients treated for curative intent had a clinical, biochemical, or radiographic response, with some presenting no evidence of disease at their last follow-up. Among patients treated palliatively, 61 percent had a clinical or radiographic response. Also, of the one-half of patients who reported pain at the local site at baseline, 68 percent reported an improvement in pain after undergoing PLDR radiation.

The first is a Phase I study (NCT03094884) that will look at neoadjuvant PLDR radiation in combination with chemotherapy in patients with non-small cell lung cancer (NSCLC) or esophageal cancer.

“In both these cancer types, patients are treated with fairly high doses of radiation to the chest or thorax, which causes inflammation or irritation to the esophagus that can be severe,” Meyer said. “We are hoping that this treatment technique will decrease the rate of severe esophagitis in patients.”

The trial is enrolling patients with Stage IIIa NSCLC or Stage II or III esophageal cancer who are going to receive neoadjuvant chemotherapy and radiation prior to undergoing surgical resection.

The second trial (NCT04452357) will look at the safety and efficacy of PLDR radiation prior to surgery for nonmetastatic pancreatic cancer. Half of the patients enrolled will receive the (lower) standard radiation dose of 56 Gy, and if no more than one patient experiences unacceptable toxicities, the other half will be enrolled and will receive a higher dose of 66 Gy.

“We found that in pancreatic cancer models treated with regular radiation, fibroblasts in the microenvironment got more protumorigenic,” Meyer said. “However, if we switched and treated the models with PLDR radiation, they did not get more protumorigenic. In fact, they reverted back toward normal. Our hope is that if we treat patients with pancreatic cancer with PLDR radiation, we can see that the pancreas is no longer supporting the cancer as much as it normally would.”

For more information about these studies and to inquire about patient eligibility, please call 215-214-1515.