Tecartus, a chimeric antigen receptor (CAR) T-cell therapy, was recently approved for adults with mantle cell lymphoma who have not responded to or who have relapsed following other kinds of treatment, and Fox Chase is a certified treatment center for the therapy.

With CAR T-cell therapy, patients’ T cells are collected and genetically modified to include a new gene that facilitates the targeting and killing of lymphoma cells. These modified T cells are then infused back into the patient. 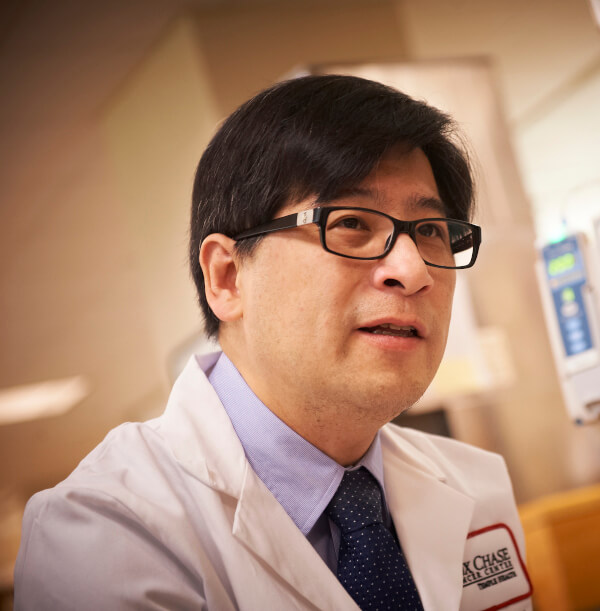 “This is one of the most promising therapies for patients with mantle cell lymphoma, including those with a type of disease called P53-mutated mantle cell lymphoma,” said Henry Chi Hang Fung, MD, FACP, FRCPE, Chair of the Department of Bone Marrow Transplant and Cellular Therapies at Fox Chase.

Fung was an investigator on the clinical trial that led to the FDA’s approval of Tecartus. The ZUMA-2 trial looked at the safety and efficacy of the therapy in patients with relapsed or refractory mantle cell lymphoma and found that 87% of participants responded to a single infusion of the therapy. All signs of cancer disappeared—a complete response—in 62% of patients.

“A complete response rate of greater than 60% with Tecartus is even better than responses seen with first-line treatment after the initial diagnosis,” Fung said. “It is a very effective treatment.”

Mantle cell lymphoma is an uncommon subtype of non-Hodgkin lymphoma that occurs in cells originating in the mantle zone of the lymph node.

Patients diagnosed with the disease will typically undergo initial treatment with chemotherapy or a stem cell transplant. However, even with transplant, the disease often recurs.

In recent years, several Bruton’s tyrosine kinase (BTK) inhibitors—acalabrutinib, ibrutinib, and zanubrutinib—were approved for patients with mantle cell lymphoma who received at least one prior line of therapy; however, these medications aren’t always enough.

“When patients failed these treatments in the past, even after having durable responses, we had nothing to offer them,” Fung said. “The responses we are seeing with Tecartus are like nothing we have seen in the history of mantle cell lymphoma.”

The effectiveness of cellular immunotherapy against other hematologic malignancies is also being explored and, at Fox Chase, a variety of clinical trials are being conducted on this treatment for multiple myeloma, follicular lymphoma, and chronic lymphocytic leukemia.